It should come as no surprise that much of the ‘beer year’ in Bavaria matches up with the church year of the Roman Catholic Church in the area. After all, was it not the monks of various denominations, who brewed beer in the countless monasteries from the end of the Dark Ages right up until their secularization in 1806? It was then that the emerging state and private enterprise put an end to the domination of this extremely profitable, exclusive beer business conducted by the church.

In Bavaria, the beer year begins just as the six-week long school holiday comes to an end. This occurs the second week in September, just as the new business or commercial year starts up after the leisurely days of summer.

And a week after that? Oktoberfest! Officially kicking off the beer year, with 16 to 18 days of Wies’n Wahnsinn, Lederhosen, and an excess of beer, Oktoberfest runs from mid-September to early October. Liters at the ‘Fest flow around 5% and the real stuff, Maerzen with 5.8-6.3% alcohol, is served at bars, taverns, pubs, guest houses and restaurants. 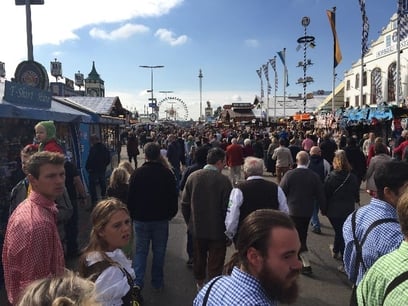 But that’s only the beginning. Kirchweih, the beginning of the Church year scarcely a week after Oktoberfest, is when the churches are swept clean, windows washed, gardens trimmed, and cemeteries cleared of rampant summer weeds and debris. While repairs to the churches are carried out, a new beer appears for but a week or two (at most, three): Kirta, a light-colored lager with maybe just a bit more alcohol than the everyday Helles (5.5-5.7%). It’s hardly a stark beer, but just enough to enable one to deal with those sudden October breezes which strip the trees of their leaves as the dusk darkens the skies in the late afternoon.

Before you know it, November dawns. At the end of the month, Christmas Festbier appears coinciding with the countless Christmas markets throughout Germany. Given all the schnapps, Glühwein (hot mulled wine), wine, champagne, and Bowle (popular type of punch) that dominate the holidays from the first Sunday of Advent through Three Kings Day on January 6th, it is probably just as well that no further brews debut until after the start of the new calendar year.

Very shortly after the Christmas holiday comes to an end, Fasching or Karneval (Germany’s version of Mardi Gras), with its countless balls and parties begins, often as early as mid-January. When it is finally put to bed with the beginning of Lent in late winter, the Starkbier season commences.

Until the dawn of modern times, life in winter throughout Europe, including Bavaria, was miserable. Food supplies dwindled, reserves often froze or rotted, there was no game nor fish, and the fields were barren. Back then, one of the only sources of nutrition was beer…very strong beer with 8-9% alcohol levels or greater. These beers filled the belly, stilled the hunger, relieved the anxiety, and provided enough vitamins, minerals, and proteins to enable the population to survive until April when the first new green shoots sprang forth from the earth.

In Munich, the Nockherberg is the site where Starkbier is celebrated and the beer’s quality is acknowledged and celebrated. The Paulaner-Thomasbräu Brewery, one of Munich’s “Big Six,” is the site for the annual Starkbier certification.

A large, broad pine tree is felled, split length-wise, and outfitted with ‘feet,’ creating a log seat for eight or ten strong men wearing Lederhosen. At 8% alcohol or more, Starkbier is sloshed over the freshly split log and the men take a seat, inundating their leather pants with the beer and the fresh pine resin. They then drink a liter (or two or three) of the new Starkbräu.

This can last a good hour or two; however, eventually the Starkbier test beckons. On the count of “three!” all the participants stand simultaneously. If the wooden seat rises with them adhering to their Lederhosen, the Starkbier is adjudged to be acceptable, and may then be released for sale. The Starkbierzeit (Strong Beer Festival) has officially begun!

Only lasting three weeks, the Stakbierzeit requires very hearty food and substantial dishes rich in calories. Unlike high-octane Belgian brews with their high-level 14 or 15% alcohol served in small cocktail glasses, the Bavarian brew is quaffed in liter Masskruege.

Starkbier might have a bitter note or it can be very “sueffig” – broad, sweet and fulsome. Quaffed cold, it makes no immediate impression, but it packs a wallop about an hour down the line, hitting with the impact of a bison charging a tank. Starkbier names always have the suffix “-ator” denoting their double strength.

The Starkbierzeit of three weeks or so concludes with the beginning of Holy Week (Palm Sunday until Easter Sunday), when all of humanity eagerly greets the spring renewal and Christendom awaits the miracle of Resurrection following the self-sacrifice of the Crucifixion. As previously stated, beer in Bavaria is intimately bound with religion.

Depending on the year, Easter could arrive between mid-March and late-April. If it comes early, there’s a pause in the high-octane beer consumption, giving the liver a break between Starkbier and Maibock. Maibock is exclusively brewed and consumed in May when the Biergardens begin to strut their stuff – sometimes as early as mid-April.

With the return of Spring and generally warmer, more clement weather, who can possibly resist the charms of this wonderful beer celebrating May, the month of Mary, the Mother of God in Catholic theology?

Maibock appears the first day of May and is “vorbei” (over) on the 31st of the month. All too often, the Maibock runs out well before the month concludes. It is best from the tap, full-bodied with a deceptively light mouth-feel and fresh. Maibock is generally a light-colored, sometimes copper-hued Bock beer at 6.3-7% alcohol. 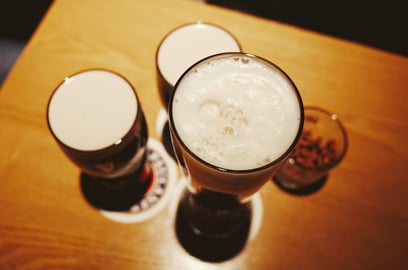 As warmer temperatures evolve, the summer beckons and Zwickbier, an unfiltered, light-colored summer beer appears. A bit lighter and less-demanding, Zwickbier is the perfect accompaniment to the summer months of June, July, and August, when temperatures can be variable, cool, or sultry and humidly high. Also known as Kellerbier, it is served cool and appearing cloudy, much like Munich’s often confusing summer weather.

And so the Bavarian beer year concludes, returning to the beginning of the beer year when the school summer holidays end and the impending Oktoberfest sees everyone dragging out their Tracht (traditional clothing) for the annual beer blast.

Thus the years go by in refreshing, sudsy, thirst-quenching brews. Recalling the past and stimulating yet another year of camaraderie, delight, and Verbundenheit, bringing people together in moments of friendship and solidarity as only Bavarian beer can evoke.

Tom Lipton has lived and worked in Munich, on and off, since 1963.

In need of temporary accommodation in Munich? We can help!